There are four characteristics I value in historical fiction.

I’ll be talking about each one in the next few posts.

1. Most important for me is ACCURACY.

For example, I noticed that Harlequin Romances was advertising for historical romance. Great. I know a little (okay, a lot) about the late Heian period. BUT. But, I am familiar with their standards. The way the romances are supposed to go—is nowhere near the path the romances of the Heian aristocracy or even peasants could or would go. Therefore, I couldn’t write for them in Heian period.

Why specifically? Because in Heian Japan, virginity was not valued. As soon as a person (male or female) “came of age,” custom dictated that they begin to be sexually active. Society considered virgins so odd they had to be avoided. That was not going to bode well with the Harlequin Romance status quo. At all.

Also, if I find that something is incorrect when I’m reading, I tend to discount most of everything else and don’t enjoy the book is much. Don’t you?

Pillow book is in the title but rarely mentioned. Notice the picture at the top of this post. Remember the red pillow. Now look at this and search for the red pillow: 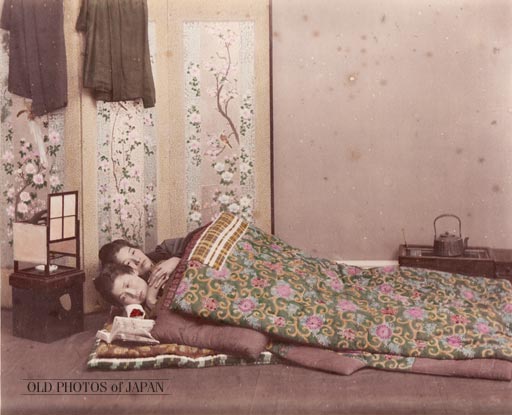 See? They did sleep on them!

Kichō are rarely mentioned in Pillow Book of the Flower Samurai, but were used. One aspect of Ann Woodward’s books that I enjoyed was her accurate portrayal

of details. Specifically kichō, screens of state used by aristocratic women so their faces would not be shown to anyone except  their husbands and their families. Her second book, Of Death and

Black Rivers: A Mystery of Ancient Japan uses this to an advantage. 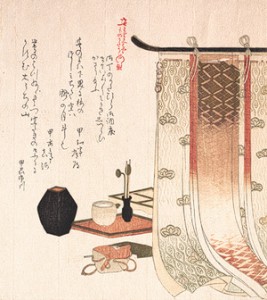