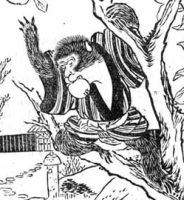 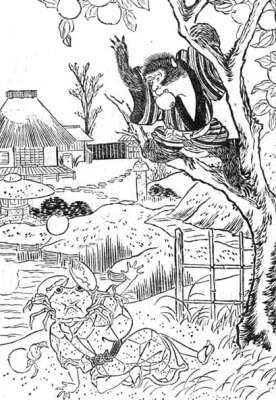 There was an old belief that persimmons have magical powers that bring the birth of children and a good harvest. Incidentally, there is a Japanese saying, “Saru mo ki kara ochiru.” This means, “Even monkeys fall out of trees,” or as the English expression has it, “Pride comes before a fall.”

Once upon a time there was a crab who picked up a rice cake, and a monkey, who had a hard persimmon-seed, came together, and who begged the crab to exchange with him. The crab, a simple-minded creature, agreed to this proposal; and they each went their way, the monkey chuckling at the good bargain. 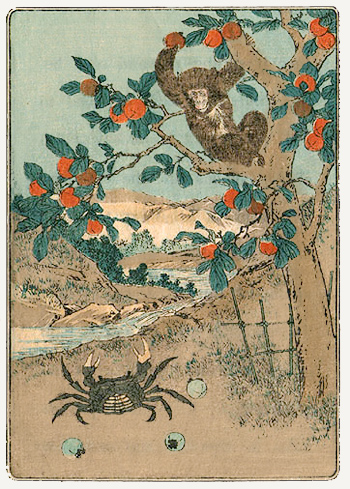 battle of crab and monkey

At home the crab planted the persimmon-seed in his garden, and, as time slipped by, it sprouted and grew into a big tree. When he readied to pluck the ripened fruit, the monkey came and offered to gather it for him. The crab consented, the monkey climbed and began eating all the ripe fruit himself, only throwing the sour persimmons to the crab. The crab was not pleased and thought he should play a trick on the monkey. So he called to the monkey to come down head first. The monkey did as he was bid. As he crawled, head first, the ripe fruit tumbled out of his pockets, and the crab picked up the persimmons, ran off and hid in a hole. The monkey, seeing this, lay in ambush, and when the crab crept out of his hiding place beat him, and went home. 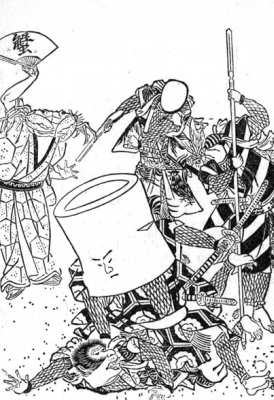 A friendly egg and bee, apprentices of a certain rice-mortar, happened by, and tied up the crab’s wounds. They planned revenge. They all went to the monkey’s house, in his absence and waited for their enemy to come home. The monkey returned, made a fancy a cup of tea and lit the fire, when, all of a sudden, the egg, hidden in the ashes, burst with the heat, and bespattered the monkey. The monkey fled, howling with pain, and crying, “What an unlucky beast I am!”

The monkey went to the back of his house, when the bee darted out of a cupboard, and a piece of seaweed, who had joined the bee, came at the monkey. No match for so many, the monkey ran away, with the others in hot pursuit. About to make his escape by a back door, the seaweed tripped him, and the rice-mortar made an end of him.
So the crab punished his enemy, went home in triumph, and lived ever after on terms of brotherly love with the seaweed and the mortar.