#3 in Historical Fiction—SIMPLICITY in the history, COMPLICATIONS in the story!

I usually detest genealogies and long family trees with lots of names I cannot keep track of. I placed the genealogies of the Taira, Minamoto and the Imperial families in the back of my book, because some people need, want, and perhaps like these things. (I’m not one of them, usually. Except when I am trying to learn them to write my story.) I understand about different learning and reading styles, with my graduate studies and teaching reading and learning disabilities.

While dates are rarely used in Pillow Book of the Flower Samurai, there was no hiding from the names. And they were confusing. So what to do? My agent suggested a “List of Characters” at the beginning of the book. I did that, but if I need to refer to them when I am reading the first 50 pages, I usually don’t go on. Sorry. If I wanted to read “plain” history, I would.

I like to work at studying the writing, the structure, the words. But if I need to keep checking up every couple of lines to see who the heck this person is, it takes all the joy out of it. I don’t mind every now and then, I’m not trying to be unreasonable, but a few places in Tale of the Genji take an entire master’s degree in history to figure out.

Even a famous and well read and well loved author, whose book was recommended to me (!), kept adding subplots with whole sets of people. After several hundred pages, when a new subplot was introduced with its accompanying entourage, I said no more and stopped reading. Yes, the history was presented in story form. And yes, the story had complications, but the history was growing more tangled by the chapter and my interest was disintegrating at the same rate. I should be able to grasp the entire or most of the whole picture at a sitting, or perhaps the protagonist didn’t have a strong enough or clear/focused enough character arc.

The history in Pillow Book of the Flower Samurai is pretty complicated. Some of the devices I used were having Kozaishō be ignorant, so as she learned so did the readers. (And me as well, often.) This was particularly true of the weaponry. The second device was having a foil, upon which information needed to be bounced. the joke in my critique group about too much information is, “as you know, Robert, you are my brother.” Like in the soap operas. Just a little tad of What I have learned to call an information dump. So instead, a fictional character named Emi was slow and had to relearn things over and over again. For the benefit of the readers, and myself sometimes too, of course.

Where did my love of simplicity come from? From two sources I believe. One is poetry.The best example I know, and remember, and love is W. H. Auden’s “Musee des Beaux Arts,” especially the first line, “About suffering they were never wrong. . . .” 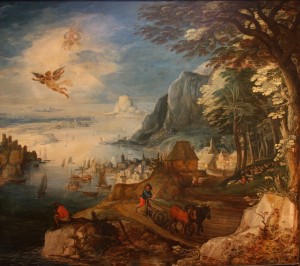 Icarus, still flying with wax melting off his wings

The other was a class and bibliography that I took as a graduate student at the University of Maryland. Every student, and believe me I mean every student in the class, had to come up with a brand new research study on, of all obscure topics, Shakespeare’s Hamlet. I selected about14 lines describing Ophelia’s burial. I wondered if it was Catholic or Anglican. ( If you’re really curious, email and I’ll tell you what I found.) 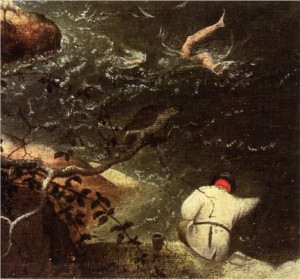 Icarus and the Angler

I had to focus in on a particular slice of something  large. I like that kind of historical fiction. Pillow Book of the Flower Samurai takes place primarily in about 25 years. I don’t usually like the kind of historical epic that godson—generation after generation after generation. There’s nothing wrong with it. It is simply my preference, for the most part.

The upturned face in the bushes

Narrowing down a slice of life and history to its most important piece, while having a terrific story that is also accurate, is what I think makes great historical fiction.. That’s what I’m attempting to do with the sequel to Pillow Book of the Flower Samurai.