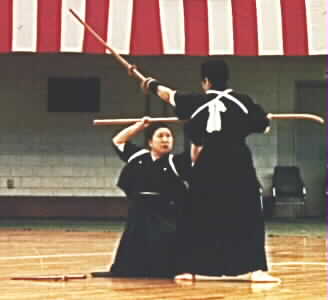 Between the 12th and approximately the 15th centuries  women defended themselves, their families and their homes. They concealed daggers in their sleeves or sashes and delivered their deadly blades with great accuracy. Women also used the naginata, which is a pole having a long, curved sword at the top.  For an ambush, women swung naginata  in narrowed places, cutting the legs of  horses to disable the enemy soldiers.

Sometimes women fought alongside their husbands in battle. And they were expected to commit seppuku (ritual suicide) if  dishonored. There is a case of a woman using suicide to protest her husband’s abuse.

Even in modern times, Japanese girls learn the ancient art of naginatajutsu— wielding the naginata.  http://www.scnf.org/history2.html.  If you’re interested, there is a website, http://www.naginata.org. It’s an interesting and informative website, with a beautiful home page. Take a look. It begins:

Naginata, a Japanese martial art of both power and grace, is characterized by the grandeur of its sweeping movements. Naginata is for people of all ages interested in either competitive fighting, or in the physical beauty of choreographed, practiced movements, called kata.

Isn’t that lovely? Power and grace. With a real blade, also deadly.Imagine a long razor blade at the end of a six-foot pole. Without a real blade, only slightly less lethal. No wonder men used the naginata, too.

Rokurozaemon with his dog and naginata

If you dare, watch this YouTube Video of the 4th World Naginata Championship:

« HISTORICAL FACT FROM HISTORICAL FICTION
The Bow and Arrow: Another Weapon Also Used by Women »