The bow and arrow provided the majority of weaponry in Heian and early Kamakura Japan. the predominance of the sword did not actually come “into” use, although it was used, until later. The actual ascendancy of the bow and arrow began during the wars before and the Genpei War.

Shooting the bow and arrow became, like most of the arts in Japan, an elaborate and systematic process which required much practice. There are actually eight named stages of shooting an arrow: 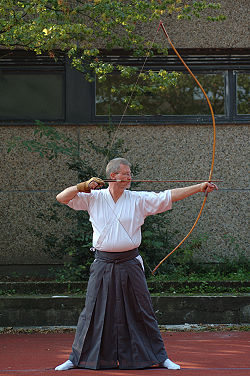 8. ZANSHIN (continuation) and YUDAOSHI (lowering of the bow, included with zanshin.

You can see all the stages if you watch this short video:
Women and Japanese Archery: The Yumi

Japanese archery involved differently than anywhere else. A three fingered glove was developed and used:

Special targets were  used as well: 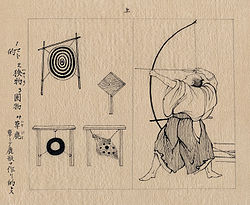 For more information check these websites:

There are many more resources for information. Happy shooting!

« Women’s Weapons: The Naginata
HASEDERA TEMPLE IN NARA AND ITS SUPERSTITIONS »