What’s faster than a speeding bullet?

Yes! The Japanese sword and this incredible artist.

Take a look at this video and see how astounding this is:

The Japanese sword is quite frankly—perfection. And it was in the Heian period that it became so. Japanese iron ore is different than everywhere else. The steel and the method of forging combined to make an objet d’art which is admired and valued today. 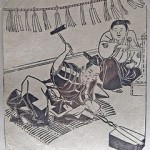 Forging a sword in the Edo Period

The methods for forging swords are not much changed from the Heian to Edo times.

The sword making process was a spiritual one, so it is no surprise an artist would portray the fox spirit “helping” out. Swords were signed by their makers; named by their owners. There were schools of sword-making in different parts of Japan.

Yes!  I have held and practiced with the wooden practice sword, the bokken. I have held the genuine article in my own two  hands. (There is a two-handed grip used.)

This is not a fencing sword, people. My expert who has a double black belt, Dr. Diane Latona, says the average Japanese sword fight lasted 20 to 30 seconds with both people dead. Imagine a 6-foot long razor blade.

Would you like more about swords? Let me know. Or, what else interests you about this time?

« THE ENDS AND THE MEANS
Japanese Superstitions »