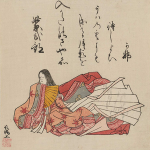 Murasaki at her desk shown in a 19th century ukiyo-e.

Donald Keene in Seeds in the Heart devotes an entire chapter to “Heian Diarists.”  Why?  Because, they were  “personal rather than public and the best-known examples…”  were written by Heian  women of the court.

The earliest Heian diary cited is Travel Diary of a Pilgrimage to China in Search of the Law (nittō guhō junreikōki). Written by the Tendai priest Ennin who lived early in the Heian period, 793-864. (Tendai was and still is a sect of Buddhism.)

For more reading try  the following: (You may find them in the public library.)

The author is the poet Ki no Ysurayuki, a man pretending to be a woman, in the 10th century.

Kagero Nikki. The Gossamer Years: A Diary by a Noblewoman of Heian Japan.

This is more of an autobiography because there are large gaps in time. Written in the late 10th century, the woman is a second wife and seems to be bitter about her husband’s treatment of her.

I personally find it interesting to look at different translations , especially from Japanese to English. So much has changed in our interpretation of the older Japanese. For example the Tale of the Genji has been translated into English three times (that I know of) and each one is a gem in its own way. Let me know what you think!

« What is a pillow book?
THE ENDS AND THE MEANS »